I left Switzerland on July 17th, and it was one of the toughest things I ever had to do. I will miss the country and being able to see the Alps occasionally, but mostly I miss the people I had gotten to know there. Saying goodbye to them was so hard, especially since I had to say goodbye to some earlier than others, and sometimes I didn't know if I would see them again before I left or not.
My last week in Switzerland was spent mostly at home or in town or the pool with friends.
On my very last day my bike was stolen. My host mom had taken the basket off of my bike to put on her own, and the lock was normally kept in the basket. I went to the pool to say goodbye to my friends and didn't realize that the lock wasn't there until I had already arrived. I thought, what's the big deal? I was only going to be there for the afternoon anyway, and there were so many bikes there that surely nobody would bother looking for unlocked bikes to steal. And I had kept my bike safe and sound for an entire year, so it was highly unlikely to get stolen now.

Read more »
Posted by Larissa Miller at 7:38 PM No comments:

XLIII. It's not over yet

When looking back at the past couple of weeks, I can smile because I have made good memories, but I'm sad because I have only a little more than one week left.
I experienced my last days of Swiss school. My class was really sweet and made a little surprise party for me. A couple girls baked a cake and cupcakes for everyone, and they presented me with a signed Swiss T-shirt and a scrapbook with pictures from our school trip. 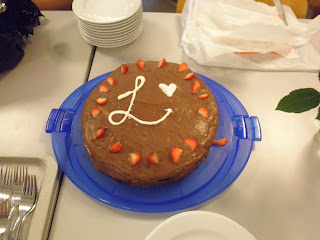 The cake that they made for me.
Read more »
Posted by Larissa Miller at 5:12 PM No comments:

The way time is flying now is a little scary. I feel like I just wrote my last blog post, and then I realize that I'm already over halfway through June. Woops.
Anyway, I have just about 4 weeks left in Switzerland, which I can hardly believe. My flight takes off on July 17th, although it was originally scheduled for July 5th (I wanted to stay longer). There seems to be so much to do in these last weeks, and I have to think about gifts, souvenirs, last trips, and final goodbyes. 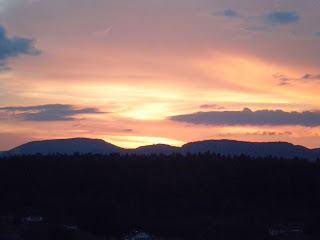 This is a sunset that I managed to photograph from my balcony one evening. I think it's a fitting depiction of the coming end to my year.

Read more »
Posted by Larissa Miller at 6:02 PM No comments: 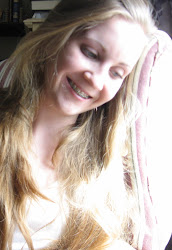 Larissa Miller
Hi! My name is Larissa, and I come from Pennsylvania. Welcome to my blog! Here is where I told the story of My Life in Switzerland as I spent my time abroad for a year. I lived with a host family during my junior year of high school, and learned how to live in all ways like a normal Swiss teenager. I hope you enjoy reading about my experiences!